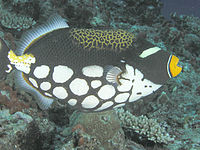 Please click on the "Inventory List" button to view all the live pets that are available this week.
Inventory List
Saltwater fish are fish that spend some or all of their lives in salt water such as oceans or salt lakes, generally with a salinity of more than 0.05%.

A marine aquarium is an aquarium that keeps marine plants and animals in a contained environment. Marine aquaria are further subdivided by hobbyists into fish only (FO), fish only with live rock (FOWLR), and reef aquaria. Fish only tanks often showcase large or aggressive marine fish species and generally rely on mechanical and chemical filtration. FOWLR and reef tanks use live rock, a material composed of coral skeletons harboring beneficial nitrogen waste metabolizing bacteria, as a means of more natural biological filtration.

The first saltwater tanks were Venetian glass jars where the Romans kept anemones outdoors, but these systems were very short lived.

The Aztec Empire had 10 ponds of saltwater aquariums at Texcoco.[2]

In 1846, Anna Thynne maintained stony corals and seaweed for almost three years, and was credited as the creator of the first balanced marine aquarium in London.[3][4]

Personal saltwater fishkeeping began on a wider scale in the 1950s, starting with the basic rectangular glass aquariums (usually 20 gallon), still popular today. Bleached coral along with a substrate of coarse crushed coral were the norm. Algae, including beneficial types such as coralline algae, were viewed negatively and were generally removed. The clean, sterile tank was viewed as the healthiest.

During the early days of marine aquaria, saltwater was collected at local beaches. Natural saltwater contains many unwanted organisms and pollutants. Aquarium literature of the time suggests that the most commonly kept marine fish were the percula clownfish, sergeant major damselfish, small, brackish-water pufferfish and scats, jeweled blennies, and blue damsels. Aquariums were equipped with large air compressors, and were heavily aerated and filtered (primarily with undergravel filters, a norm for some time).

An ever-growing number of hobbyists experiencing the inconvenience of gathering natural sea water and the concurrent development of analytical chemistry techniques led to research into the chemical composition of sea water. Synthetic salt mixes were developed to replicate the chemical environment of the tropical ocean, including trace elements and salts. This advance made marine fishkeeping popular in areas without access to clean sea water.

Air driven, counter-current protein skimmers and reliable submersible electric heaters were invented in Germany. Various advances in filtration included trickle and hang-on filters, both allowing a more natural equilibrium in the aquarium environment. The advancement of fluorescent lighting technologies to provide higher output, along with metal halide lighting, enabled the first reef tanks, making it possible to keep corals and other invertebrates without natural sunlight.

More efficient chemical testing allowed aquarists to understand the chemical properties of aquariums. By the 1980s, a biologically-based understanding of how to maintain an artificial ocean environment brought more successful and widespread marine fishkeeping.